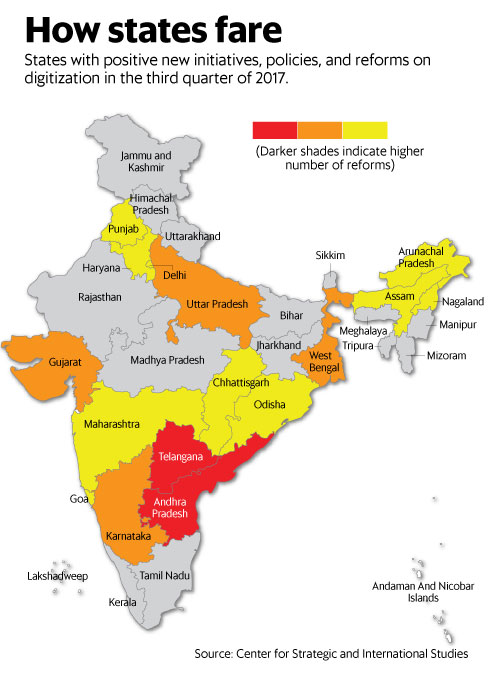 The third quarter of 2017 started with the landmark goods and services tax reform coming into effect nationwide. For the Bharatiya Janata Party, a political shake-up in Bihar resulted in the party expanding its control in yet another state assembly—and this is important. There’s an increasingly widespread understanding that states are best positioned to drive its ongoing experiments in economic development and good governance, a position Prime Minister Narendra Modi supports. Just like US states, Indian states can serve as laboratories of democracy—and their experiments are getting more and more cutting edge. Every week, the Wadhwani Chair collects a weekly update of developments in India’s states. Our regular quarterly review shows that in the third quarter of 2017, states made digital governance a focus of their reforms across a wide variety of sectors. Their efforts showed that states recognize the importance of citizen involvement as a link to political support.

•Tata Power Delhi Distribution announced that in March 2018 it would begin distributing 250,000 smart meters to customers. The smart meters are internet-enabled, allowing them to communicate with the central system and give consumers more control over how and when they use electricity.

•Two of Andhra Pradesh’s discoms began accepting digital payments through BharatQR, the first discoms in India to do so.

Indian states are increasing the use of digital tools to improve the quality of governance and their citizens’ ability to access government services.

•Maharashtra launched the MahaDBT portal, which will allow beneficiaries of all state government schemes to have cash benefits deposited directly into their bank accounts.

•Six states (Andhra Pradesh, Arunachal Pradesh, Assam, Gujarat, Telangana and Uttar Pradesh) as well as the Union territory of Puducherry announced that they would use the Central government e-marketplace (GeM) to conduct procurements.

•Karnataka’s agriculture department is working with Microsoft to use Big Data to develop a price forecasting model that will help farmers determine what crops to plant to obtain the best return on their investment.

•In a boost for manual labourers, the Punjab labour department has decided to use an online portal to register construction workers and to increase transparency and accuracy in the distribution of benefits to them.

Similarly, states are the pioneers when it comes to using digital tools for delivery of healthcare, education and training, not only expanding access but improving the quality of services received. Telangana and Karnataka stand out as leaders in healthcare.

•Telangana signed a memorandum of understanding with Microsoft India to use cloud-based analytics to improve the state’s child-health screenings. The programme will draw on the Big Data contained in Microsoft’s Intelligent Network for Eyecare to catch vision issues before they are detectable.

•Telangana, specifically Hyderabad, is also home to a pilot of digital health records that will test whether digitization can increase access to state-provided benefits for women and children while also reducing the administrative load.

•Similarly, Karnataka is partnering with Tata Trusts to open a health services hub that will use digitization of records to better track whether area residents are receiving benefits. The project hopes to increase use of local primary healthcare centres by 50%. Karnataka also rolled out a universal health coverage programme, covering 14 million households, that uses Aadhaar to track patients.

•Uttar Pradesh will introduce telemedicine clinics to expand healthcare reach to citizens who are not in areas with easy access to hospitals. Control rooms in five cities will be armed with a team of doctors available 24x7 to provide consultations to patients.

Finally, states can also use digital tools to improve their economic development. This can be through improved education and training, by improving the business environment for industry or expanding access to market services by deploying technologies.

•While Gujarat signed a memorandum of understanding with Google to advance its ‘Digital Gujarat’ agenda to train small and medium entrepreneurs to use digital platforms for business development, Haryana’s chief minister partnered with the Dell Foundation to create a cell in his office to lead efforts to raise the quality of education and skills training in the state.

•Chhattisgarh has decided that empowering women through distribution of smartphones will be a way to improve access to services and information which can be used to conduct small business.

•West Bengal has decided to launch a new portal to support a new state agency created by the passage of the state’s Single Window System Bill to expedite industrial clearances for businesses.

Digital governance holds out the exciting possibility that even India’s smallest and least-developed states can see huge gains in their governance capabilities—as seen by the presence of Nagaland in this quarter’s round-up. Given the global interest in the potential for innovation in this area, states should have no trouble finding partners willing to provide funds and expertise. But truly achieving the potential for digital innovation requires that state governments be willing to accept the need for transparency and reform.