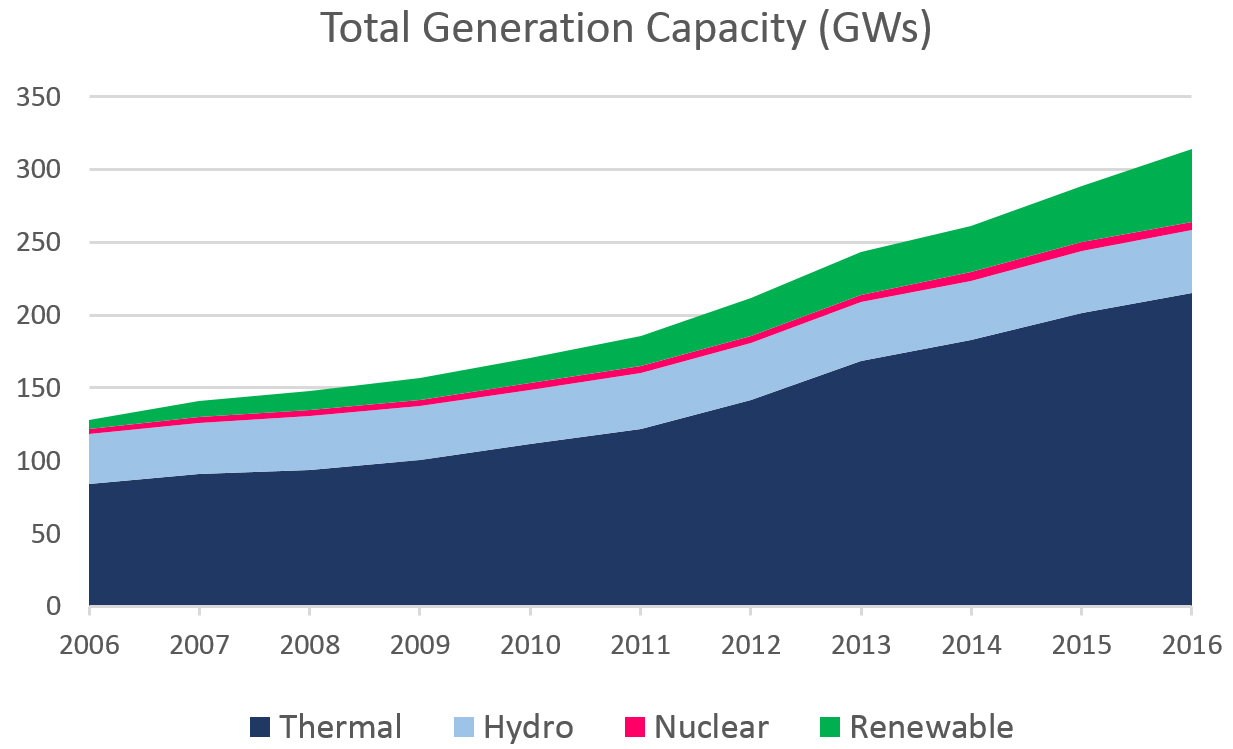 India’s state power ministers convened in Delhi recently for an unusual group meeting. The event had a dual purpose: partly to celebrate how far India has come in rebuilding its power sector, and partly to lay out a roadmap for confronting the challenges that remain. My recent journey through 11 of India’s 29 states, speaking with senior power officials, confirms that India has made incredible progress in tackling its power generation deficit. Increased generation capacity through new additions of renewables and greater efficiency and reliability of coal stocks for thermal power plants is coupling with the success of India’s incredible demand-side measures to create a perfect storm of plentiful power. However, the next set of problems for its power sector are in some ways more difficult to confront. To address those problems, India will have to employ a diverse and creative set of solutions.

India’s power sector has undergone a transformation. In just five years India has reduced its peak power deficit from 8.7 percent of demand to near zero and is realistically on track to achieve an overall power surplus in the near future. What’s more, India has managed to increase capacity drastically while also improving its power balance, with renewables accounting for 15.9 percent of generation by the end of 2016, up from 4.8 percent in 2006. The balance could shift even further by 2022, when thermal power plants are projected to be operating below 50 percent capacity. And while India is on track to meet its commitments under the Paris climate accords, these plans don’t offer much room for a fallback to coal-powered generation. Finally, India has reversed its balance of trade in power, becoming a net exporter of electricity—something that would have been unthinkable just four years ago.

But India’s power challenge is far from over; it’s just taking on a new form. This “plentiful power” has yet to reach more than 4,000 villages that remain unelectrified, many of them located in India’s most inaccessible areas. This relatively low number obscures the scope of the problem: because “electrification” is defined as possessing a single point of connection, more than 4 million homes remain without power. And India’s state and national governments must battle the widespread belief that power should be free, or nearly free, for key groups like farmers—or even all consumers. Perhaps most importantly, India’s dozens of state-run distribution companies (DISCOMs), which are responsible for bringing power to individual homes and businesses, are deep in debt: they can’t find enough customers willing to pay the high cost of electricity delivered over a leaky, inefficient grid. They must choose to source power from renewable sources, which depending on time of day are less cost competitive than cheap thermal power plants. Within this backdrop, state DISCOMs, the lynchpin to a thriving energy sector in the country, could be the perfect case for an extreme business plan competition. Can anyone make such a business thrive within such political and technical constraints?

But with all this excess power, India’s states will need to either find a way to generate demand from industries and charge them fair rates or find ways to stimulate demand from the residential sector. Current per capita electricity consumption in India is less than one-quarter of neighboring China’s so there is room for growth in this sector. One particular appliance that could have a serious impact is the air conditioner, which is projected to increase peak power demand in India by 60–100 gigawatts (GW) by 2030, particularly during the summer months. Such peaks will require a more responsive grid that can manage fluctuating loads from a growing share of fluctuating renewable energy sources. Varied economic growth and the experience of integrating new types of energy sources into their grids means that India’s leading states will become laboratories for understanding what the future of the power sector might look like in a nation that has only recently achieved a unified electric grid.

For now, all experiments are required, including testing and deployment of storage technologies to manage fluctuating loads and swinging electricity prices. Experience can inform policy and set standards that lead rather than lag for this emergent industry. Similarly, checking the power leakages from beleaguered DISCOMs, while trying to decouple India’s power sector from politics, may be accomplished by rolling out new smart metering technologies. Currently several states are experimenting with pilot projects that may inform large-scale procurement and roll out along the lines of the successful light-emitting diode (LED) bulb distribution project undertaken by India’s Energy Efficiency Services Limited (EESL).

Another experiment in decoupling power distribution from politics, particularly in the agriculture sector, a network of solar micro-grids coupled with high-efficiency irrigation pumps could turn farmers from being a drain on the power sector to potential local power producers (when their pumps sit idle). Finally, India’s central government has an ambitious program to transform its automotive sector by facilitating large-scale deployment of electric vehicles. While this will be executed by India’s Ministry of Heavy Industries, the surging power demand from this initiative could provide a new lifeline to state DISCOMs looking for new consumers. The challenge with all such experiments will require that India’s various ministries streamline and let states tailor make initiatives suitable to their agendas—only they can solve India’s paradox of plenty.