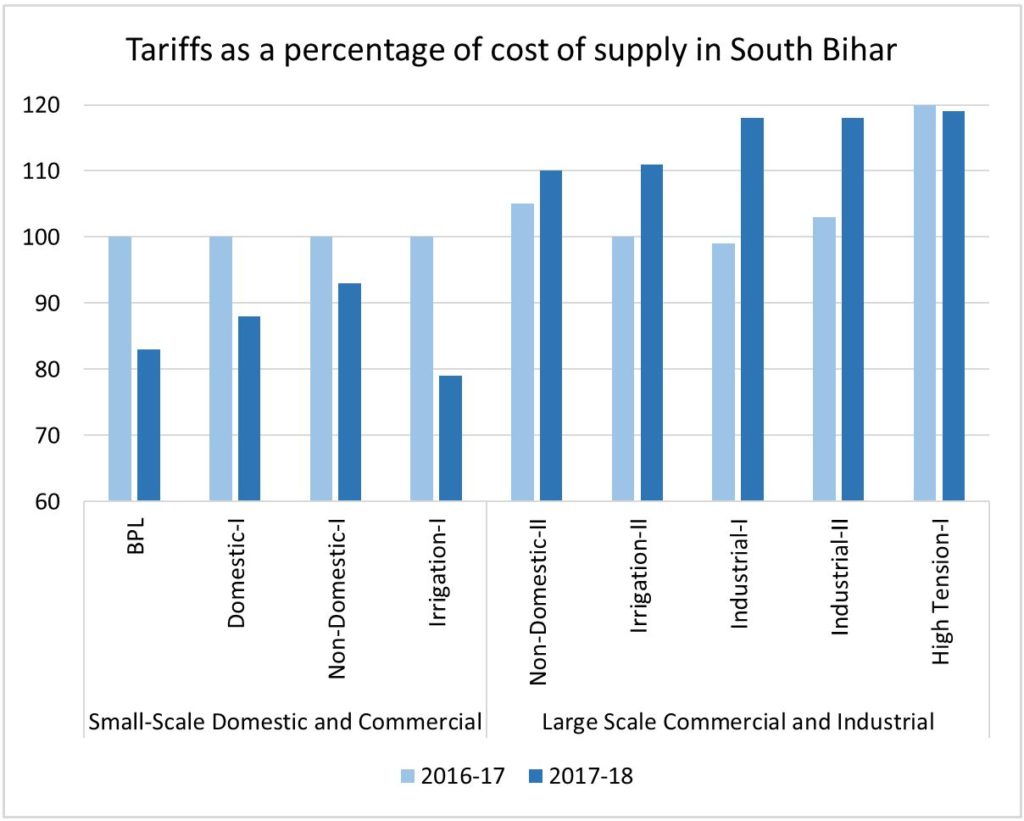 Photo credit: This chart of the South Bihar Power Distribution Company’s tariffs shows the percentage difference between the cost of the supply of power and the cost charged to various different categories of consumer in FY16-17 and FY17-18. Tariffs for the current fiscal year create a large gap between smaller consumers (on the left) and larger industrial clients (on the right). Source: Bihar Electricity Regulatory Commission’s FY17-18 Tariff Order for the South Bihar Power Distribution Company. Graphic compiled by CSIS Wadhwani Chair staff.
By Sarah Watson
Posted on April 18, 2017

India’s heavily politicized system of power subsidies requires large-scale power consumers to pay for the electricity use of key political constituencies. But over the past 10 years these high-paying consumers have increasingly left the system, seeking cheaper and more reliable power from other sources. Their flight has contributed to the severe strain on utility finances, threatening a downward spiral. But Indian states must resist the impulse to force high-paying customers back into the system; instead they should transfer these subsidies from corporate balance books to the state’s own budget, directly subsidizing electricity for the poor.

In November 2015 the Ministry of Railways made a landmark purchase of 300 megawatts of power via open access — meaning it purchased power from sources other than the distribution utilities of the states where its facilities are located. The purchase came in the face of widespread resistance by states and only after the Central Electricity Regulatory Commission ordered four states to grant the ministry open access privileges. Two states, West Bengal and Bihar, are currently appealing the Commission’s order.

The attempt by states — some of them politically aligned with Prime Minister Narendra Modi — to keep Indian Railways as a customer is indicative of state-run power distribution companies’ heavy reliance on industrial customers to fill the gaping holes in their balance sheets. In 2015, India’s dozens of public distribution utilities (known as discoms) owed nearly $68.5 billion collectively, almost double their debt four years previously. It is widely acknowledged that discom debt is driven by the gap between tariffs paid by subsidized consumers and the cost of supply. Political constraints currently make this gap unbridgeable.

But discoms also face challenges at the other end of the spectrum: their highest-paying consumers, like Indian Railways, are pursuing new arrangements for power supply, from open access to captive power plants. Over the past 25 years, India has seen a steady shift towards captive power consumption by industrial consumers. According to the 2016 Economic Survey, the compound annual growth rate for captive power generation over the past ten years was 9.3 percent, compared to 4.6 percent for utility generation. In 2008, captive power generation stood at 25 gigawatts (GW) or 17 percent of all generation. By the end of 2016, that figure had risen to 40.7 GW, and captive generation from coal is likely to account for 10 percent of all coal generation by 2018. Industrial power demand from utilities remained nearly flat between 2012 and 2015; in contrast, demand from captive power grew each year. Thanks to high surcharges and additional non-price barriers (such as some states’ refusal to export power), open access has proved less popular, peaking at just over 3 percent of total generation in 2013-14. This still represents significant growth, however, given that the necessary power exchanges only opened in 2008.

The most recent tariff schedule from the Bihar Electricity Regulatory Commission (BERC) makes clear how heavily states depend on large-scale consumers. BERC made the news in March for a 55 percent hike in the power tariff after five years with no rate increase. But as the tariff order shows (pages 364-365), the new tariffs have actually fallen farther behind the average cost of supply in many categories. In 2016-17, domestic and below poverty-line (BPL) consumers were charged 100 percent of the average cost of supply; now they will be charged 88 and 83 percent, respectively. Small scale agricultural irrigation consumers used to pay 100 percent of the cost of supply; now they will pay only 79 percent.

The picture is quite different for high-volume consumers. Depending on the amount of energy they use, industrial consumers’ costs will rise from 99 or 103 percent of the cost of supply to 118 percent. BERC estimates that on average these consumers will pay about 13 cents per kilowatt hour—well above the point where open access starts to make financial sense. High tension and railway tariffs, already elevated, remained roughly the same at between 108 and 119 percent of the cost of supply. In 2016-17 Indian Railways bought more than twice (page 174) as much power as BPL consumers; thus sale of power to Indian Railways at elevated rates essentially subsidizes the entire consumption of the politically crucial BPL sector. (Hence Bihar’s suit against the CERC order.)

As high-paying customers leave the system, discoms will be forced to raise tariffs even higher for those who remain, increasing the attractiveness of open access and sparking a vicious cycle. But Indian manufacturers need constant supplies of power at reasonable prices to engage in high value-added manufacturing, and most Indian discoms cannot yet guarantee that. This makes pushing industrial consumers back into the system so that they can continue to subsidize power for others — as Maharashtra is doing — a deeply inefficient solution. Reducing wastage both from outdated machinery and widespread theft would help close the gap between tariffs and cost of supply, but not completely (and would involve forcing many poor people to pay for power who are currently getting it for free). Discoms will still operate in the red as long as state governments believe that raising the cost of power to meet the cost of supply is political suicide.

India’s states should assume full responsibility for making up the difference between the cost of the supply and the tariff for small-scale domestic and commercial users, up to a respective cap of 100 or 200 units per month. The subsidy could take the form of an additional payment to the state discom, direct benefit transfer to the relevant consumers, or state funding for renewable energy options that allow consumers to sharply reduce their energy bill —for example offering consumers free solar-powered irrigation pumps.

Creating an explicit subsidy would have the advantage of forcing state governments to openly confront the actual cost of providing power, rather than seeking to pass it off to a few deep-pocketed customers. Having this charge on the balance books would also help states prioritize savings from investment in energy efficiency and repairing the grid by ensuring that those investments bear direct returns for the state exchequer. And states that lightened the burden for industrial customers would attract more industry, broadening their task base and helping to support the subsidies. India may not be ready — politically or economically — for a system in which all power users pay the full cost of the electricity they consume. In the meantime, it is the state, and not the private sector, that can most efficiently fill the gap.